St. Dionysius of Zakynthos, the Saint of Forgiveness, "the Walking Saint" (December 17) 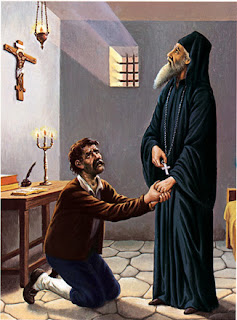 "...St. Dionysius was remarkable in his forgiveness and love for his fellow man. A man came to St. Dionysius's cell and begged the saint to hide him from his pursuers. When St. Dionysius asked him why he was being pursued, the man told him that he had killed a man. The murderer did not know that he had killed the saint's own beloved brother Constantine. St. Dionysius was very grieved but hid the man and did not surrender him to the law. Instead he instructed him and brought him to repentance. According to local tradition, the murderer later repented and became a monk himself at that same monastery. St. Dionysius is an example to us all for his forgiveness of even the most grievous sins against us..."
Αναρτήθηκε από ΝΕΚΡΟΣ ΓΙΑ ΤΟΝ ΚΟΣΜΟ στις 10:08 μ.μ.