How an Atheist Cancer Patient Came to Believe in God 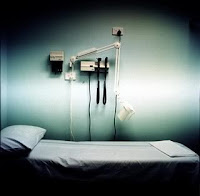 Quite a few years ago the following real-life story took place. This story was told to me by my good friend, Fr. Demetrius, the parish priest of the St. Vasilios Greek Orthodox Church located at Sahtouri Street, Piraeus, Athens, Greece. I present this story to you just as it was narrated to me by Fr. Demetrius himself.

“One morning after the Divine Liturgy, I went to the Church office. A fifty year old man came in to talk to me. I did not know him neither had I ever seen him before in my Church. He spoke to me about a forty-two year old man who was admitted to the hospital in Piraeus, Athens, Greece. He was diagnosed with cancer. The disease had spread throughout his body and had metastasized into his brain. Following an examination, the doctors had told him that there nothing that could be done to save his life. He was taking large doses of medicine but they did not help him. This gentleman told me that the hospitalized man was a close relative of his. He requested that I go to the hospital as soon as possible in order to give him Holy Communion.

As requested, I went to the hospital to fulfill this obligation to administer Holy Communion to the sick man. As soon as I entered the patient’s room, it became apparent to me that he was in bad shape. It was further verified to me that the disease had spread to the brain and there was no chance of survival. His days were numbered. The patient was the only person in the room. The other bed was empty. At a certain point, the patient awakened from his coma and opened his eyes. He immediately saw me and with great difficulty told me the following story:

“My family admitted me to this hospital facility thirty-five days ago. An eighty year old man was already in the room that I was assigned to. This patient was suffering from bone cancer. He was suffering horrific pains. In spite of his pain, he would continuously pray: “Glory to you Oh God, Glory to you, Oh God” and this would be followed by a series of prayers. I was an atheist and I was hearing this for the first time in my life. I had never in my life stepped foot in a Church. This is why I became so startled when I observed that after saying his prayers he would calm down and sleep peacefully for two or three hours. But when he woke up again he would groan from unbearable pain. And then he continued to pray “Glory to You, Oh God!”

I was also groaning suffering from immense pain and yet he, in spite of his pain, continued to glorify God. But I, in my frustration from my pain blasphemed the name of Christ and His Holy Mother. The old man was actually thanking God for giving him cancer. Hearing him go on like this constantly and I, suffering my own pain, became upset with him. In addition to his constant praying, he would daily request to receive Holy Communion.

I, the filthy one, swore at him constantly. I would say to him “shut up, shut up finally! Can’t you see that the God that you glorify is torturing us severely with this cursed illness? What God? There is no God!” The old man would calmly hear me and reply: “He exists, my child, God does truly exist and He is a loving Father. Through the illness that He has given us, we are being cleansed of our many sins.” These replies of the old man made me angrier and I began once again to blaspheme both God and demons. I started yelling out and saying: “God does not exist! I don’t believe in anything; neither in God, His Heavenly Kingdom nor in the other world.” 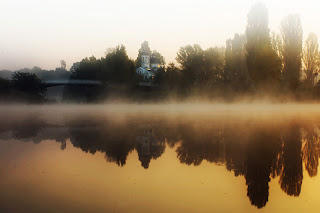 Following this exchange between us, the old man would calmly reply: “Wait and you will see with your own eyes how the soul of a believing Christian is separated from his body. I am a sinner but the Grace of God will save me. Wait, you will see and believe!” He continued to glorify God and His Holy Mother. He would say a specific prayer that repeated the word “hail” for the Virgin Mary (taken from the Salutations of the Akathist Hymn). He also chanted the hymns “Oh Virgin, Birth-Giver of God” and “It is truly meet to bless you.”

At one point, he suddenly stopped praying and I heard him say: “Welcome, my guardian angel! I thank you for coming with such a resplendent party of angels to take my soul.” In great shock, I opened my eyes to see before me the heavenly host. The old man then made the sign of the Cross; crossed his arms on his chest and took his last breath. Suddenly the hospital room was filled with brilliant light that was brighter than ten suns. I, the unbeliever, the atheist, the materialist, saw this miracle with my own eyes. Then an extremely beautiful fragrance filled the room. I was dumbfounded by what I saw because I realized at that point that the old man was right all along.
I then called my parents and told them everything that I had witnessed and experienced. I angrily told them off because they had never spoken to me about the existence of God. I then invited my friends and relatives to come close to me and asked them to tell me everything about faith in God which I had never been taught by anyone. Dear Father, I now believe that God truly exists. This is why I am asking you to hear my confession and for you to give me Holy Communion.

Death! Death! DEATH! (The Mystery and the Process of Death)
ATHEISM (tag)
We and the spirits of the departed
A revelation on the torments of hell & the unworthy priest

Why’s the smile of elder Joseph of Vatopedi from eternity?
"Death to the World"
LOVERS OF TRUTH: THE LIFE OF HIEROMONK SERAPHIM ROSE
A Deer Lost in Paradise
LIVE, BEYOND THE LIMITS!