Do You Seek A Heavenly Vision? 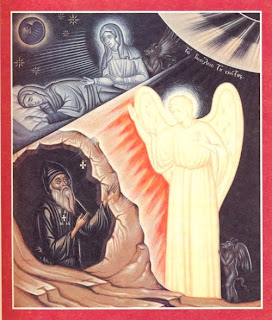 Spiritists of our day accept every manifestation from the spiritual world as though sent by God, and immediately they boast that God has been "revealed" to them. I knew an eighty year old monk whom everyone respected as a great spiritual director. To my question: "Have you ever in your life seen anything from the spiritual world?", the monk answered me, "No, never, praise be to God's Mercy." Seeing that I was astonished at this, he said, "I have constantly prayed to God that nothing appear to me, so that, by chance, I would not succumb to pride and receive a fallen devil as an angel. Thus far, God has heard my prayers." This recorded example shows how humble and cautious the elders were. The devil, clothed in the light of an angel, appeared to a certain monk and said to him: "I am the Archangel Gabriel and I am sent to you." To that, the brother responded, "Think! Were you not sent to someone else, for I am not worthy to see an angel?" The devil instantly became invisible and vanished.

"As the present world approaches its end, the world of eternity looms nearer.... The end of the world merges with the beginning of eternal life.... The spiritual world is moving itself closer to us, manifesting itself through visions and revelations." +Saint Gregory the Dialogist

THE OTHER WORLD is "breaking into" this world and giving hints of existence. God and His angels send their grace to suffering souls who seek truth amidst lies and chaos. And meanwhile, Satan and his fallen angels are revealing themselves to people who seek after signs, "spiritual" experiences, phenomena, power, and false manipulation of the created order. In the past, demons appeared and deceived people under the guise of "gods," being worshipped through statues and oracles. In the modern Western world, under many guises: as "angels of light," as "UFO's," as "charismatic" experiences, and even as "Bigfoot," (some people see blinding light when they see "Bigfoot," which doesn't make sense if he were just an animal). And sometimes they reveal themselves as the malicious spirits they are. Satan is now walking naked into human history. Some people who read this have had contact with dark spirits, either in their true form or under the guise of light, as in "white magic" (see the article "Never Kneel" in issue no. 4 of D.T.T.W.).

Nowadays, many people have had their spiritual senses opened up, either through drugs or through phsychic/occult practices, or a combination of both. As the ancient God-illumined teachers say, however, there is nothing particularly special or important about the sensuous perception of spirits, and in fact it can be very dangerous (see the article on the "Opening of the Senses" in this issue). Let no one be deceived by the hazy, soft-focus false mysticism that is being propagated on the best-seller list of your local bookstore. There is a dark side as well as a light side. The dark side often tries to mask itself as the light side to the spiritual realm. The dark side may pretend that it cares about our welfare. But it doesn't. It wants to destroy us, to corrupt our nature, to turn us into horrible spiritual freaks and mutants, just like the fallen angels who turned away from God.

That is why we must seek, not experiences, but truth. God is Truth, and the Truth is a Person, Jesus Christ. And He alone can deliver us from deception. Not all those who read this have had a sensuous perception of spirits. Some have experienced the grace of God without seeing or hearing Him, but they know it's real. And some have experienced the working of the demons without seeing or hearing them, and they know that that's real, too. Some, having turned away (or been turned away by others) from the presence of God, have felt the dark despair which is more than despair, and which has crossed over the border from the natural to the infernal realms. This state of despair is magnified by the demons, who try to lead us to kill ourselves, because they know that suicide is the one sin for which IT'S TOO LATE to repent (see "Suicide: the Last Genocide" in issue no.4).

In this issue, we have alternated accounts of the light side (God and His Angels) with accounts of the dark side (Satan and his minions), so that people will see as graphically as possible the huge difference between the two. Between these two there is a great gulf fixed, which is impossible to Cross after we die.

Click: A Deer Lost in Paradise
An Orthodox spiritual father comments on 12-year-old Akiane  “Orthodoxy and the Religion of the Future”LIVE, BEYOND THE LIMITS!