The Holy Belt Of The Theotokos (August 31)

In The Name Of The Father,
The Son,
And The Holy Spirit. 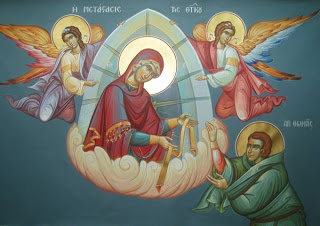 Father Demetrios Serfes
Orthodox Christian Initiative for Africa
ΕΛΛΗΝΙΚΑ για το θέμα: 31 Αυγούστου, εορτή της αγίας Ζώνης, και καλό Φθινόπωρο!...
Tropar -Dismissal Hymn [our note: closing hymn] - of the Mother of God.
Plagal of the Fourth Tone
O EVER-VIRGIN Theotokos, shelter of mankind, thou hast bestowed upon thy people a mighty investure, even thine immaculate body's raiment and sash, which by thy seedless childbirth have remained incorrupt; for in thee nature and time are made new.  Wherefore, we implore thee to grant peace to the world, and great mercy to our souls.


Kontakion of the Mother of God
Second Tone
THY precious sash, O Theotokos, which encompassed thy God-receiving womb, is an invincible force for thy flock, and an unfailing treasury of every good, O only Ever-virgin Mother.

THE MOST VENERABLE and full of grace Belt of our Blessed Virgin Mary, which is found at the Holy Great Monastery of Vatopedi in Agios Oros (Holy Mt. Athos), is the only precious souvenir that survives from her earthly life.
According to the Sacred Tradition and the history of our Church, the Most Holy Theotokos three days after she fell asleep she rose from the dead and ascended in body to the heavens. During her ascension, she gave her Holy Belt to the Apostle Thomas.  Thomas, a long with the rest of the holy Apostles, opened up her grave and didn't find the body of the Theotokos. In this way the Holy Belt is proof for our Church of her Resurrection and bodily ascension to the heavens, and, in a word, at her metastasis.

The Holy Belt, according to the tradition, was made by the Blessed Virgin Mary herself with camel hair.  The Empress Zoi, wife of Leo 6th the Wise, out of gratitude for her miraculous cure, embroidered the Belt with gold thread, as it is found today, but divided in three pieces.  Originally it was being kept in Jerusalem and later in Constantinople.  There during the 12th century under Manuel A' Komninos (1143-1180) an official holiday for the Belt was established on August 31st.  In the end, Emperor John the 6th Katakouzinos (1347-1355), who had a special love toward the Holy Great Monastery of Vatopedi, as is evidence by many related accounts, donated the Belt to the Monastery.  Since then the Holy Belt is kept at the Holy Monastery of Vatopedi, in a silver case of newer manufacture which depicts the Monastery.  On the bottom right border of the depiction the artist made the drawing of the donor Emperor Katakouzinos along in the a sign which refers to his donation to the Monastery.

Numerous are the miracles, that have taken place up to today with the Holy Belt. Its value is priceless because it's associated to the Blessed Virgin Mary.  She has the grace and to her the miraculous power is attributed, which with many ways she transmits to the faithful.
The Holy Belt maintains unaltered the grace of the Most Holy Theotokos, because it became connected with her person and her life and because saints are spirit carriers during not their life, but also after their death.  The same phenomenon is mentioned in the Holy Scriptures when objects that the Prophet Elias and the holy Apostles wore actually performed miracles, because they had the grace of the saints. For this reason the Church attributes it honorary worship, as it does to the Holy Wood of the Cross of the Lord.
The Holy Belt has the unique grace to cure women's sterility as well as cancer patients, with a ribbon that has firstly been blessed on the Belt and is subsequently worn by the sterile women and patients. 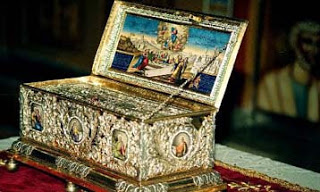 Relic box of the Precious Belt -Sash- Cincture, of the Theotokos

The Tropar also known as the Dismissal Hymn [Closing Hymn], as well as the Kontakion  is a translation from: The Great Horologion, translated from the Greek by the Holy Transfiguration Monastery, Boston, Massachusetts, 1997., p. 594

Note of Father Demetrios Serfes: I would like to humbly thank Dejan for sending me this information in Greek, and for John Constantinidis for his translation from the Greek.

The Holy Girdle (Zoni) of the Theotokos
Miracles by the Holy Belt of Most Holy Theotokos
Theotokos (=Mother of God), tag in our blog
Theotokos, tag in the other our blog 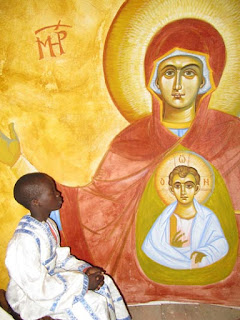 From Zambia & Malawi about Dormition of Mother of God
Dormition of the Theotokos Resource Page
Mother of God (Virgin Mary), Orthodox Church and African peoples (& Why the Orthodox Honor Mary)


An orthodox little boy from Cameroon.
Photo from here & here