The Great Martyr Saint Anastasia the Roman, 20 years old (feast day October 29), the holy protector of the women who suffer from breast cancer

The Martyr Anastasia the Roman[note 1] was born in Rome of well-born parents and left an orphan at the age of three. As an orphan, she was taken into a women's monastery near Rome, where the abbess was one Sophia, a nun of a high level of perfection. She raised Anastasia in fervent faith, in the fear of God and obedience. After seventeen years, Anastasia was known in the whole neighbourhood, to the Christians as a great ascetic and to the pagans as a rare beauty. The persecution against Christians by the emperor Decius (249-251) began around that time. The pagan administrator of the city, Probus, heard of her and sent soldiers to bring Anastasia to him.
The good Abbess Sophia counselled Anastasia for two hours on how to keep the Faith, how to resist flattering delusion and how to endure torture. Anastasia said to her: 'My heart is ready to suffer for Christ; my soul is ready to die for my beloved Jesus.' Blessed by her abbess to suffer for Christ, the young martyr Anastasia humbly came out to meet the armed soldiers. Brought before the governor Probus, Anastasia openly proclaimed her faith in Christ the Lord. On seeing her youth and beauty, Probus first attempted flattery to make her deny Christ and dissuade her from the Faith, "Why waste your youth, deprived of pleasure? What is there to gain by enduring tortures and death for the Crucified? Worship our gods, marry a handsome husband, and live in glory and honor."
The holy maiden steadfastly replied, "My spouse, my riches, my life and my happiness are my Lord Jesus Christ, and you will not turn me away from Him by your deceit! I am ready to die for my Lord, not once but - oh, if it were only possible! - a thousand times." Probus then subjected Anastasia to fierce tortures. The holy martyr bravely endured them, glorifying and praising the Lord. When they stripped her naked, to humiliate her, she cried to the judge: 'Whip me and cut at me and beat me; my naked body will be hidden by wounds, and my shame will be covered by my blood!' She was whipped and beaten and cut about. She twice felt a great thirst and asked for water, and a Christian, Cyril, gave her a drink, for which he was blessed by the martyr and beheaded by the pagans. 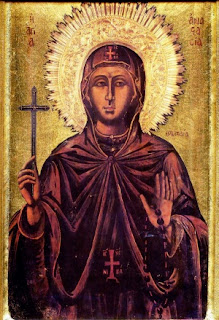 Then her breasts and tongue were cut off, and an angel of God appeared to her and upheld her. The people, seeing the inhuman and disgusting treatment of the saint, became indignant, and the ruler was compelled to end the tortures. She was finally beheaded with the sword outside the city. The body of the saint was thrown out beyond the city to be eaten by wild animals, but the Lord did not permit her holy relics to be dishonored. At the command of a holy angel, Abbess Sophia went to find St. Anastasia's mutilated body, and with the help of two Christians buried it in the earth. In this manner, St Anastasia received the crown of martyrdom. Her feast day is celebrated on October 29.[note 2]
Note of our blog: The holy relics of the saint, on which appear the signs of the horrific torture, kept in the Monastery of St. Gregory, Mount Athos. The Saint Anastasia the Roman (who cut off the breasts of) is the holy protector of the women who suffer from breast cancer.

Troparion - Tone 4 Your lamb Anastasia, calls out to You, O Jesus, in a loud voice: "I love You, my Bridegroom, and in seeking You I endure suffering. In baptism I was crucified so that I might reign in You, and I died so that I might live with You. Accept me as a pure sacrifice, for I have offered myself in love." Through her prayers save our souls, since You are merciful.
Kontakion - Tone 3 Purified by the waters of virginity, righteous Anastasia, you were crowned by the blood of martyrdom. You grant healing and salvation to those in need, and who call on you from their hearts, for Christ gives you strength, pouring out on you ever-flowing grace!
See also Notes