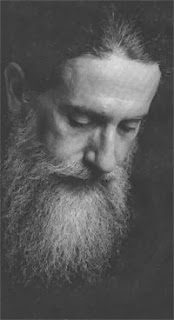 When Miguel Angel de la Jara Higgingson was seven, his mother had a vision. She sensed that her son would some day leave her for a "far away place, like an island, there where people of solitude lived who pray all the time and rarely step out into the world". Even she, however, could probably not have imagined just how far from his native Peru, both physically and spiritually, his life's search would take him.

Now he is Father Symeon the hermit, a Greek Orthodox monk who lives on Mount Athos, a self-administrating, all-male monastic community on the Athos peninsula - the eastern most of three jutting peninsulas in the northern Greek prefecture of Halkidiki.

However, it's not just his Peruvian origins that make Father Symeon such a well-known figure among visitors to Mount Athos; it's also his radiant presence as an artist, poet and painter that makes him so sought after, especially by the young.

His journey began in 1968, when at the age of 18 he left Peru to discover the world. After travelling through Europe and Asia for over two years - during which time he was exposed to eastern philosophies and religions such as Buddhism, Hinduism and yoga - he finally settled in Paris, where he lived for the next three years.

It was in Paris that he first met a Greek Orthodox monk and learned about Orthodoxy, a meeting that was to have a profound effect on him. For the next two and a half years he studied hagiography (icon painting) with Leonide Ouspensky, while his interest in Orthodoxy deepened.

He first visited Greece in 1972, where he accepted the Orthodox faith, before returning to stay in 1973, originally joining the Monastery of Agios Georgios (St George) on the large Greek island of Evia. When, in 1974, the entire monastery relocated to Agios Gregorios (St Gregory) on Mount Athos, Symeon followed, living at the Agios Gregorios Monastery until 1987. He subsequently became a hermit, moving to the old hermit's cell of Timios Stavros (Honorable Cross) near Stavronikita Monastery, where he built a new dependency and formed a complex.

On first meeting Father Symeon, one is struck by his youthful passion and joy - qualities which, as he says, "one cannot hide". A compassionate listener and gentle speaker, he responds to questions with spontaneity and rigour, without ever becoming dogmatic or distant. Behind his piercing eyes is an inquisitive mind, forever seeking ways to express the love and joy he wants to share with others.

After 24 years in Greece, Father Symeon declares a profound love and admiration for Greek culture and language, saying he prefers writing in Greek to even his native Spanish. To his extensive travels he owes a rich and varied experience, as well as a love of French Surrealism, tatami mats, Japanese food and Chinese art. And to his Peruvian family he owes his love of art.

According to Symeon, it is the need to tap into the inner joy in all things which has led him to art and prayer; that has been the predominant force in his life. Through poetry, paintings, photographs, prayers and lectures he has reached out and tried to touch people's hearts beyond the borders of the Holy Mountain.

He has several published works, including his 1985 lecture Nifalios Methi (Sober Drunkenness), the 1983 publication The Holy Mountain Today brought out by Alexandria Press in London, and the poetry collection Simeon Mnema, published in 1994. A new book of poetry, titled Me Imation Melan (In Black Cloth), is due to be released shortly by Agra Editions in Athens.

An artist in solitude as much as a solitary, a monk in the midst of art, his poems and his paintings have both the freshness of the "here and now" and the depth of eternity, and are of a striking immediacy and poise. They make one wonder what the difference between the artist and the hermit is - or even if there is one at all.

Source
Click:
The 'Death' of Anita Phillips
A Journey to the Ancient Church: Evangelicals Discovering Orthodox Christianity
Three girls of July "Let the mouth become basil and a rose": St. Sophia the Righteous, the "Ascetic of the Panagia"
A Deer Lost in Paradise

LIVE, BEYOND THE LIMITS!
Theosis, St. Silouan and Elder Sophrony
LOVERS OF TRUTH: THE LIFE OF HIEROMONK SERAPHIM ROSE
Lover of Truth: St John, The Wonderworker of San Francisco
Orthodoxy's Worship: The Sanctification of the Entire World
St Anthony's orthodox monastery in Arizona
Patriarchal Stavropegic Monastery of St John the Baptist - Essex
The Impossibility of Aloneness: When Christ Found Me in the Himalayas
Two Deaths
The Orthodox New Martyr Jose Munoz-Cortes from Chile (1997)
The Orthodox New Martyr of Mexico: Paul de Ballester-Convallier
Orthodoxy in the Heart of Africa - in the Ends of the Earth!
The Invisible Naked Ascetics of Mount Athos
Eugene Ionesco and the Elder On Mount Athos
Orthodoxy Protestantism
Journey to Orthodoxy
"Death to the world"
Orthodox America - By Issue Number
Orthodox England
"The Orthodox World"
Saint Herman Press
Αναρτήθηκε από ΝΕΚΡΟΣ ΓΙΑ ΤΟΝ ΚΟΣΜΟ στις 1:19 μ.μ.