In the time of Constantine the Great there lived in India a pagan king named Abenner, who had only one son, Joasaph (yo-sahf). Abenner was a wise administrator and fearless warrior, loyal to the Indian code of honor, courage and the hatred of Christians.

When the Prince was born, astrologers and wise men were called to prophesy the Prince's destiny as king. All of them said the same: that he would be a wise and powerful king. But one dared to tell the truth: the Prince would become Christian and give up his throne. The King was furious. He ordered every Christian to be killed or banned from the kingdom, and he put the Prince in a private, guarded castle to shield him from any possible Christian influence.
For twenty years of his life--his entire childhood and youth--Joasaph was confined to the castle. During this time he was taught the skills of wisdom and warfare. The King visited his son often, and was pleased to find his boy qrowing into a fine, strong young man. Finally, convinced that the prophecy was false, Abenncr agreed to let the Prince see his future kingdom. The impression Joasaph received seemed mixed. The world was indeed a very beautiful place, but the sins, sorrows and eventual death of man dimmed its beauty in Joasaph's eyes, and made him doubtful. No longer content with his luxuries in the palace, he strove to find a life that was soul-fulfilling, unlike what he felt succession to the throne would be.
At the same time, the holy monk Barlaam was told by God that he must bring the salvation of God's word to the Prince over 1,000 miles away. In time Barlaam arrived and, disguised as a merchant with a "pearl of great price," was able to get into the castle. Barlaam explained the Orthodox Christian faith to the young Prince, who in turn was immediately devoted and demanded to be baptized. In the months that followed the entire household was converted, including King Abenner who eventually became a hermit.
Barlaam left, and Joasaph became king. But he was not content there and missed his spiritual father. Finally he gave his kingdom to relatives and went away to a desert monastery, doing many great things in his time.
(Compiled and illustrated by Martinian Prince, age 14: original Life in the writings of St. John Damascene). 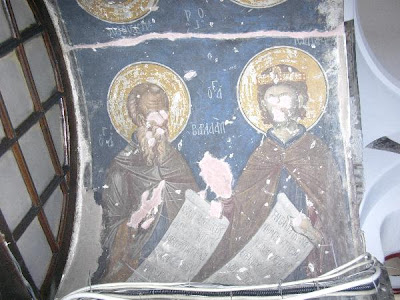 In various Slavic calendars of feasts today, November 19th is listed as the feast of Sts. Barlaam and Joasaph. A few notes are listed below just for consideration and to clear up some possible misconceptions.

1. In the Greek listing of Saints, Barlaam is not mentioned, though Joasaph is honored on August 26th. His title is "Saint Joasaph, Son of Abener, King of India."

2. Icons of the two Saints are rare, but where they are both depicted they both have halos.

3. According to Prof. Rhys Davids: "When and where they were first canonized, I have been unable, in spite of much investigation, to ascertain." The oldest list of Saints in which he finds the name is that of Petrus de Natalibus, Bishop of Equilium (1370-1400).

4. The Ethiopian Church has canonized both Barlaam and his ass.

5. Despite contrary scholarly opinion, there is actually a good case the story of Barlaam and Joasaph was authored by the highly educated St. John the Damascene. For example, we know he did not object to writing about foreign extraordinary tales, such as we see in his studies on dragons and evil fairies or ghosts. He also defined man as "a rational animal, liable to death, and capable of intelligence and knowledge," whose bodily nature consists of "four elements: blood, phlegm, yellow bile and black bile". In the story of the Unicorn found in the tale of Barlaam and Joasaph, we find mention of dragons and these same four elements represented as serpents.

6. The tale of Barlaam and Joasaph takes place in "the interior regions of the Ethiopians called India." Homer speaks of two Ethiopias, one towards the rising sun and one towards the setting of the sun. At the time of John of Damascus, it had this same extensive meaning, where Ethiopia could mean the majority of North Africa or even parts of Asia - it was designated by their darker skin. K.S. Macdonald writes about this and the historicity of the tale in her study The Story of Barlaam and Joasaph: Buddhism and Christianity:

"Alexander the Great expected to discover the source of the Nile in India. Shinar or Sennar figures largely in the story, as the place in whose desert Barlaam lived. Accepting Sennar as a country of which the writer had some correct idea as being around the upper reaches of the Nile and Blue Nile, we must conclude that the writer of Barlaam considered India not very far from the confines of Abyssinia which was regarded as part of Ethiopia. To this day the Abyssinians call themselves Ethiopians, thus connecting our Joasaph, prince of India, with Dr. Johnson's story of "Rasselas, or the Prince of Abyssinia". And it is here likely that we will find the truth in the story. When the Thebaid was crowded with hermits or monks, very likely a prince of Ethiopia was converted and betook himself to the desert after much persecution from his father, as described in the Barlaam story."

7. Though there are similarities between the tale of Joasaph with that of Buddha, this does not negate the historicity of either figure, but only shows a similarity in the origin of the tales. Though it is true the early story of Joasaph is colored with imagery from the life of Buddha, the latter part of the story is similarly colored by the life of St. Anthony the Great. The lives of Barlaam and Joasaph are primarily told as a literary tale with the seeming purpose of catechising those of the Far East with a familiar tale. This was often done by ancient writers to steer a story of what may have elements of truth towards a higher didactical purpose.
A note from our blog:
Linking the biography of saint Joasaph to the Buddha's biography would, in my opinion, be regarded as evidence that the saint had lived in India, and not in Ethiopia.
See also:
The Orthodox Church in West Bengal, India
And:

Lastly, there is an interview with Christina Thanos, who produced a short documentary called Lucky Girls about the Theotokos Greek Orthodox Girl’s Orphanage. She also organized a lenten fundraising campaign for the orphanage. Lent is over, but they are still accepting donations, even of just a few dollars. You can listen to the podcast here, and visit the film’s website, which includes fundraising details, here. The film here. Site here! 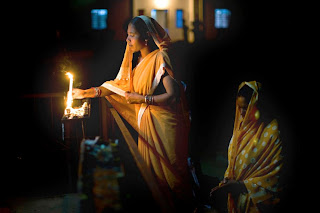 “Orthodoxy and the Religion of the Future”
Russia Orthodox Church Seeks Land in Delhi
The Impossibility of Aloneness: When Christ Found Me in the Himalayas