The Mother of God as "Eye" and "Earth" 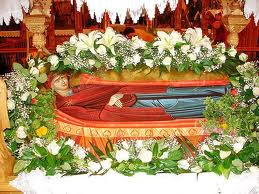 By Metropolitan Hierotheos of Nafpaktos and Agiou Vlasiou
MYSTAGOGY

Every feast of the Mother of God is a matter of joy for the entire Church, precisely because the Panagia glorified the human race, by becoming the person who donated her flesh for the Incarnation of the Second Person of the Holy Trinity, the Word of God. The Fathers of the Church, the holy hymnographers and the iconographers compete to present the value of our Panagia, who is the joy of Angels, the glory of Saints, as well as the protection of all people who suffer and are burdened from various problems which are closely related to human life.

Among the many festivals of the Mother of God, an important position is held for the feast of the Dormition of the Theotokos, which acquires great importance and value both in terms of its content, since the Panagia defeated corruption and death by the power of Christ, as well as the time it is celebrated, which is why it is called the Summer Pascha.

By participating in this great celebration of the Mother of God, I would like to present two images used by the sacred Nicholas Cabasilas to show the most revered, most pure and holy person of our Panagia.

One image presents the authentic person and work of our Panagia, which is the image of the eye. Indeed, the entire human nature, with the Panagia, acquired an eye. "Now has the nature of man actively received an eye." Before the Panagia was born and accepted with obedience to become the Mother of Christ, human nature was blind, it could not see God. Of course, there were the Prophets of the Old Testament who did see God, but this was temporary, since they could not overcome death. Thus, in general the entire human nature, after the sin of Adam, was akin to a blind man, since he wandered to the left and to the right, worshiping false gods. And this was natural, since man abandoned the true God and was spiritually blinded. The worship of idols was a consequence of the loss of the worship and knowledge of the true God. Hence, that which the Prophets and Righteous of the Old Testament desired to see were seen by human nature in the person of the Panagia.

The other image associated with the work of our Panagia is the creation of man. It is known that God created man after taking soil from the earth and then breathing into it a soul. The earth contributed, since from there God took matter to form and build the body, but it did not do it of herself, because the earth does not have freedom to be asked and to make a decision.

This image is adjusted towards the recreation of man which occurred through Christ from the Panagia, but with a difference. Namely, the Panagia is the new earth from which the new man was created, but while the earth in the first creation of man did not participate by her will, since she did not have freedom, the Panagia in the second creation attracted the Craftsman and Creator Himself with her virtue and her life, and she gave movement to the hand of the Creator to the regeneration of the human race. Therefore, the Panagia is the supplicator for us to God, before the Supplicator even came, that is the Holy Spirit.

These two images show the greatness of the Panagia, as well as the great and significant work she did for human nature. This is why we at every feast of the Mother of God, especially at this present feast of the Dormition of the Mother of God, we attach our love. Through her we see the love of God and deal with the problems that plague us. Through her we eliminate all our spiritual blindness and acquire the knowledge of God. Through the Theotokos God reconstructed the human race, and we of the Church taste this regeneration. Our life takes on another meaning and context. This is why our love towards the Panagia is a reciprocation of what she did and still does for us.

Every person has their story and problems. For all of these we must flee to the Panagia, who is alive and hears our prayers. This is not a pipe-dream or utopia, but a reality. Our people have extensive experience on this subject. We see, hear and feel the Panagia in the difficult moments of life. This tradition must be cultivated by us. Because we as a people have something deeper and more meaningful; we have a living relationship with God, the Panagia and the Saints. And it is a fact that the whole world today has need of this perspective, which is the only possible way to lead us along the one-way streets of this life, and the impasses of the current unambiguous and therefore tumultuous society.

On the occasion of today's feast let us pray that we may be found under the protection of the Mother of God, the Panagia, so that united with her, we can have the spiritual eyes to see the greatness of God, the tragedy of man, as well as the way we can effect our restoration and recreation.