"Let the mouth become basil and a rose": St. Sophia the Righteous, the "Ascetic of the Panagia" 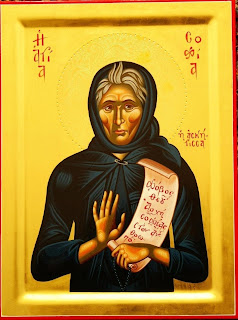 St. Sophia the Righteous, the "Ascetic of the Panagia" - Commemorated on May 6th (from here)

Full of Grace & Truth
ΓΙΑ ΤΗΝ ΑΓΙΑ, ΕΛΛΗΝΙΚΑ
Elder Sophia to be officially numbered among the Saints
The Holy Metropolis of Kastorias is deeply moved to inform the fulness of our Holy Metropolis that bears the name of Christ, along with all the inhabitants of Western Macedonia, that the Ecumenical Patriarchate, led by our Ecumenical Patriarch Bartholomew, along with the Holy Synod, has recorded and numbered among the Saints of our Orthodox Church, the Ascetic of the Holy Monastery of Panagia Kleisouras, the Eldress Sophia. Thus from now and to all the ages, she who "fought the good fight" invisibly in the Monastery of Panagia, Sophia the Ascetic, will be honored as a Saint and will be praised in hymns and spiritual odes from the faithful, especially on the 6th of May, the day of her dormition. For this reason, on November 27th 2011, in the Holy Monastery of Panagia Kleisouras, during the Orthros before the Divine Liturgy, will the relics of the Righteous Sophia be put forth for the veneration and blessing of all. The Metropolitans Paul of Drama and Seraphim of Kastoria will take part.

(amateur translation of text from here) 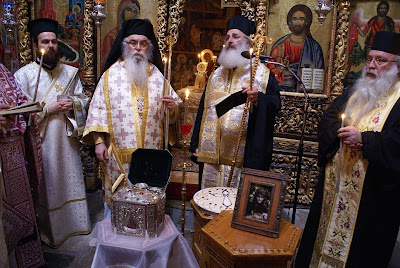 Bishops and other clergy celebrating a memorial service for the Righteous Sophia before her holy relics earlier this year (from here)
Life of the Saint
Sophia Saoulidi, the "ascetic of the Panagia", was born of Amanatiou and Maria Saoulidi in a village of Trebizond in Pontus of Asia Minor in 1883. She was also married there years later in 1907 to Jordan Hortokoridou, but after seven years her husband disappeared (likely not of his own will) in 1914 and she was left with a newborn son who soon thereafter died. These tragedies helped shape her piety and repentant spirit, making her rely solely upon God. Her asceticism began in Pontus on a mountain away from her relatives. It was there that one day Saint George appeared to her and warned her to notify the villagers of a coming persecution and to flee, and in this way she saved the village. Her soul breathed Christ and the Panagia with her simple and humble love. "One is the Lord and one is the Lady", she would say of Christ and the Panagia, "the rest of us are all siblings." She was a teacher of the simple, especially of women, and every word that came from her lips was spoken with humility and love. As with many "fools for Christ" of the past, the proud and the educated didn't recognize her worth as much as those who possessed simple and humble hearts. She came to Greece in 1919 as an exile. The name of the ship that carried her was Saint Nicholas, so when they arrived in Greece the Panagia appeared to her and said: "Come to my house." Sophia asked: "Where are you and where is your house?" The Panagia responded: "I am in Kleisoura." Therefore she went and settled at the Monastery of the Birth of the Theotokos in Kleisoura of Kastoria when she was 44 years old. There the abbot of the Monastery was Gregorios Magdalis, an Athonite of great virtue. Sophia learned much from him and always spoke his name with the highest respect. By the command of the Panagia, Sophia lived within the fireplace of the Monastery in the kitchen, which was also used to cook the food. She would sleep there two hours a night and the rest of the night pray on her knees. In the winter it was especially cold there, while during the rain water would drip on her. At times she would light a little fire, but this did not help much. At the window she would always have a candle lit before the fresco of the Panagia. This is where she ate and spent her time, and when visitors came to see her she would say their names before they even introduced themselves to her. People came from Thessaloniki and the surrounding areas, even as far as from Athens, just to see her. She would tell people their names and their family problems without being told beforehand. Among those who came was Fr. Leonidas Paraskevopoulos, who later became Metropolitan, and he would say: "You have a great treasure up there". She dressed poorly and had a blanket with holes. Her sandals had holes also. Visitors would see how she suffered in the cold and humidity and give her clothes, but she would take them with one hand and give them away to the poor with the other. She also always wore a black scarf, and since her days in Pontus never bathed. Her fasting was constant and only allowed herself oil on the weekends. She cared little for what she ate, eating only to survive, and cared less about cleanliness so that she would even eat food without washing them. And despite the germs and the worms, she always remained healthy. Visitors would often give her money, which she would hide anywhere she could. And when someone had need, she would go and give the money immediately. She saw many scandalous things done by priests and lay people, but never criticized anyone. "Cover things, so that God will cover you", she would say. Her popularity arose rapidly, so that people came not only from all over Greece, but even places like France and Israel to see her. Some villagers made fun of her however, calling her "Crazy-Sophia". To many she looked like Saint Mary of Egypt, as thin as a bone and all dried up. Within however she contained the same beauty of Saint Mary. 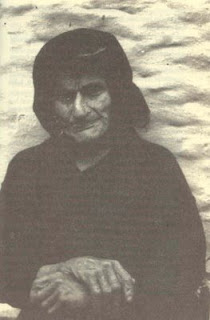 A photograph of St. Sophia the New (from here)
Wondrous Events
Her love for God and humanity was powerful and she had impressive experiences with the Panagia and various Saints. As the ship carried the passengers from Asia Minor to Greece in 1919 a storm hit that put the passengers at great risk. Eventually the storm ceased and everyone survived, but the captain said after making the sign of the cross: "You must have a righteous person among you that saved you", and everyone looked at Sophia who was standing at the corner of the ship the entire journey praying. This incident actually exists on videotape, where she herself recounts what happened: "The waves were filled with angels and the Panagia appeared, saying, 'Humanity will be lost, because they are very sinful.' And I said: 'Panagia, let me be lost because I am a sinner, so let the world be saved.'" In 1967 Sophia became very sick and was in great pain. Her stomach had open sores that smelled. She took the pain courageously, saying: "The Panagia will come to take away my pain. She promised me." Some Athenians have her on videotape explaining what happened soon thereafter: "The Panagia came with the Archangel Gabriel and Saint George, as well as other Saints. The Archangel said: 'We will cut you now'. I said: 'I am a sinner, I must confess, receive communion, then you can cut me'. 'You will not die', he said, 'we are doing a surgery on you', and he cut me open." As with many Saints, she had a special relationship with wild animals, especially with bears in the forest, but also with snakes and birds.New and Old Calendar
From the time when the Ecclesiastical Calendar changed in Greece, Sophia would keep the fasts of both the Old and New Calendar so as not to be an offense to anyone. Unfortunately there is a tendency among Old Calendarists to distort facts and consider her one of their own, but this does not conform to reality as she was always in communion with the Church.Spiritual Sayings
"The fear of God makes a person wise. What is the fear of God? Not that one should be afraid of God, but to be afraid to sadden someone, to harm someone, to do them no wrong, and to not make accusations. This is wisdom. After all this, God will illumine you as to what to do in your life." "Look for and find the poor and gather them and help them. This is what God wants, and not to go to church as if to pray." "Almsgiving should be in secret, for God alone to know." "Oh, if you only knew what happened to the Lord on Wednesday and Friday, you would put nothing in your mouth. Neither bread, nor oil. Do not break the fast of Wednesday and Friday." "The angels speak every day. God sends the angels to see if people are repenting." "The Panagia weeps, she weeps every day. She says to her Son: 'My Son and my God, grant the world wisdom, forgive the world.'" "Let the mouth become basil and a rose."Views Of Her Sainthood
In 2009 the Metropolis of Kastoria organized the discussion of the topic "The Saints Honored In Kastoria". Much was discussed of the Eldress' life, and Metropolitan Seraphim of Kastoria gave his own opinion which reflected the opinions of those in the local church of Kastoria, that she was a saint, that hymns had been written and an icon painted of her, and the necessary official requirements for Glorification would be submitted to the Ecumenical Patriarchate. 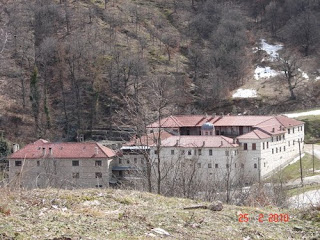 The Monastery of the Nativity of the Theotokos, Kleisoura (from here)
The Holy Monastery of Kleisouras
The Monastery of the Birth of the Theotokos is 35 kilometers from Kastoria and 70 kilometers from Florina. It was founded around 1314 by the Hieromonk Neophytos of Kleisoura and once again established in 1813 by Hieromonk Isaiah Pista of Kleisoura who came from Iveron Monastery on Mount Athos after a vision of the Panagia. During the Liberation War of Macedonia the Monastery gave hospitality to many of the Macedonian fighters, among whom was Pavlos Melas. When the Turks burned down the neighboring village of Variko in 1903 the residents fled to this Monastery for safety. Until 1993 the Monastery was not an organized coenobitic community, and it was during these years that Eldress Sophia lived here in asceticism from the time she left Pontus until she died in her old age. Since 1993 the Monastery serves as a female coenobitic convent and has an aim to "resurrect" it as a center of worship in Western Macedonia. Eldress Sophia fell asleep in the Lord on May 6, 1974 and was buried on the grounds of the Monastery. She was well-known in Western Macedonia, and many who knew her come to pray at her tomb. Her relics are kept in the Monastery, and upon request to the nuns can be venerated by the faithful. The current abbess is Anisia Egglezou and the Monastery has six nuns and one novice. The address is Κλεισούρα, Τ.Κ. 52054 and the telephone number is 24670 - 94330. 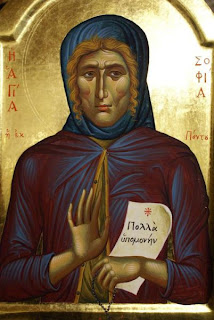 St. Sophia of Pontos, the Righteous (here)
Apolytikion in the Third Tone (amateur translations below)
O blessed mother Sophia, you became wise, and the adornment of the Mother of God, and you lived your life in the Monastery ascetically, from which have spread the praise of your struggles, striking the ranks of the demons. And as you stand as an intercessor before Christ, do not neglect those who honor you with fervor.
Kontakion in the Fourth Tone
You became a treasury of Divine wisdom and all-consuming fear [of God], O mother Sophia, through your motherly intercessions, O blessed one, you offer to all the richness of grace.
Megalynarion
Being made spiritually wise, O mother, you passed the whole of your life in utter patience, and now you are made to dwell in the beauty of your Bridegroom, in His bridal chamber.
(here)
Through the prayers of our Holy Fathers, Lord Jesus Christ our God, have mercy on us and save us! Amen!
Αναρτήθηκε από ΝΕΚΡΟΣ ΓΙΑ ΤΟΝ ΚΟΣΜΟ στις 12:28 π.μ.