Orthodox Spiritual Legacy: A Guide to the Triodion and Lent, on the Road to Easter


The Lenten Triodion, starting point for Easter - warnings against pride and hypocrisy


Written for the devout Christian, the Triodion is full of warnings against pride and hypocrisy - the ultimate spiritual sins to which religious folk are so susceptible. Its hymns teach us the true nature and purpose of fasting and of Lent itself.

The Lenten Triodion is the service book of the Orthodox Church that provides the texts for the divine services for the pre-Lenten weeks of preparation, Great Lent, and Holy Week. The Lenten Triodion is the title of a classic and popular English book translated with an extensive and helpful introduction by Metropolitan Kallistos and Mother Mary; it provides many (but not all) of the texts necessary to observe the great fast. In Greek and Slavonic it is simply called the triodion. It is called the triodion because the canons appointed for Matins during this period are composed of three odes each. The weeks of preparation, and especially the Sunday gospel readings, serve to exercise the mind, whereas the fasting of Great Lent focuses on the body, and Holy Week's services exercise the spirit.

The three weeks that commence on the fourth Sunday prior to Great Lent constitute the weeks of preparation. Each has its own distinct theme which is expressed in the Gospels readings appointed for the Divine Liturgies on these days:

The Church eases us into the Lenten fasting discipline during this period. The week following the Sunday of the Publican and Pharisee is fast-free. The week following the Prodigal Son is a normal week -- we fast as usual on Wednesday and Friday. In the week following Meatfare Sunday, no meat is eaten; eggs, fish, and dairy are permitted on any day. Forgiveness Sunday brings the period of preparation to an end. The next day, Clean Monday, begins Great Lent. The Vespers service served on the evening of Forgiveness Sunday includes the Rite of Mutual Forgiveness and is the first service of Great Lent.

A journey, a pilgrimage! Yet, as we begin it, as we make the first step into the "bright sadness" of Lent, we see- far, far away - the destination. It is the joy of Easter, it is the entrance into glory of the Kingdom. And it is this vision, the foretaste of Easter, that makes Lent's sadness bright and our lenten effort a "spiritual spring." The night may be dark and long, but all along the way a mysterious and radiant dawn seems to shine on the horizon. "Do not deprive us of our expectation, O Lover of man! [ Fr. Alexander Schmemann (†) ] 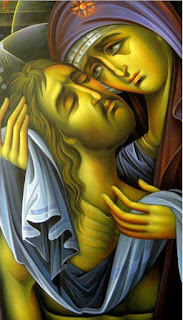 There is more to Lent than Fasting, and there is more to fasting than food. This principle lies at the heart of the Lenten Triodion, the main hymnbook of Orthodox Lent. For the Orthodox Church, Lent is without doubt the richest and most distinctive season of the ecclesiastical year. The Lenten services, the spiritual lessons of the Triodion, and the biblical readings for the season invite us to simplify our lives and to immerse ourselves in the “bright sadness” of repentance.

Orthodox Lent begins on Clean Monday, seven weeks before Pascha, when Orthodox Christians celebrate the Lord’s Resurrection. But before Lent begins, it is announced in advance. This preparation for Lent is made above all through the Lenten Triodion, which makes its appearance in the liturgical life of the Church three weeks prior to Lent, on the Sunday of the Tax-Collector (or Publican) and the Pharisee. The Triodion remains a regular feature of the Church’s liturgical life until the end of Holy Week.