Saint Paisios in the Youth Culture of Greece (photos + video) 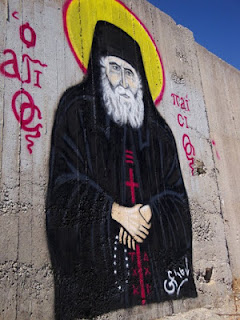 On a wall on the island of Samos, there has been designed an unusual graffiti image, depicting the figure of the Holy Elder Paisios, whose memory is celebrated on July 12th.

Although this artistic trend is to some extent linked with rap and hip hop music, we should remember the song by the Greek rapper Artemis titled "Max (Passions and Virtues)" from his album Wolves in Sheep's Clothing (Λυκόσχημος Αμνός), which speaks of the true story of the conversion of a young junkie named Max to Christianity after reading the book Counsels of Saint Paisios: Passions and Virtues in prison.

Saint Paisios, both before and after his recent canonization, is very popular in Greece in all demographics, including the youth. Of course, there have been excesses, which is common with such popularity, and this existed even when the Saint was alive, which made him very unhappy. Many of his words have been misinterpreted and distorted, and things are attributed to him that he never told.

Despite this, he has brought much benefit and is beloved. The above two examples of youthful artistic culture, shows there are many beautiful, original and different ways to express this love.


Book: The Gurus, the Young Man, and Elder Paisios, by Dionysios Farasiotis

A Different Light: Youthful Travelers in Contemporary America
LIVE, BEYOND THE LIMITS!
The Path to Renewal of the Heart
Through Closed Doors 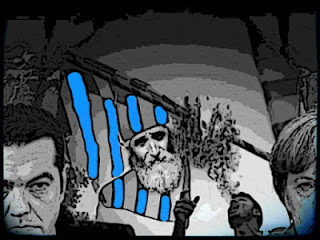 St Paisios in... Eurogroup (from here)