Why the Orthodox Honor Mary 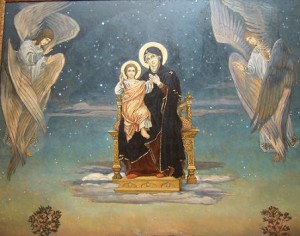 The most difficult part of my Orthodox experience to discuss with the non-Orthodox is the place and role of the Mother of God in the Church and in my life. It is, on the one hand, deeply theological and even essential to a right understanding of the Orthodox faith, while, on the other hand, being intensely personal beyond the bounds of conversation. I am convinced, as well, that the Orthodox approach to Mary is part of the apostolic deposit, and not a later accretion.
When I was doing graduate studies some decades back, I decided to concentrate my historical research on the “cult of Mary” (the veneration of Mary) in the historical Church. With that decision came a semester of intensive research, combing through materials of every sort. And throughout all of that research the question, “When did this begin?” was uppermost in my mind. I came to a surprising conclusion. It began at the beginning.
The historical evidence for Mary’s veneration is so obvious that it is simply overlooked: her place in the gospel accounts. I find much of the “historical” evidence about Christ to have a similar feature. It is amusing, and annoying, to read modern historical critics of the New Testament who come away from those documents arguing that the notion of Christ’s divinity was a later development. Somehow they manage to read the New Testament and miss the most obvious thing: the writers all believe that Jesus is divine. They fail to notice that the very existence of the “Jesus material” of the New Testament exists solely because its writers believed He was God. Every line flows from that belief.

In a similar manner, Mary’s place within the gospels carries a message of veneration. Those who do not see this obvious feature of the New Testament generally get lost in the details, reading too much into sayings such as Jesus’ “Woman what have I to do with you?” and the like.
First, the stories of Mary hold an important place in the gospel narrative. St. Mark has the least mention of her, with no birth narrative. St. Luke has the most material, and St. John perhaps the most important. Biblical critics take a “least is best” approach and will say things like, “St. Mark knows nothing of a birth narrative,” a patently overstated claim.
For me, it is the seemingly “gratuitous” material that points to veneration of Mary. St. Luke’s account has the Magnificat hymn in which Mary declares, “All generations will call me blessed.” It is a phrase that can only be compared to God’s promise to Abraham:

I will make you a great nation; I will bless you And make your name great; And you shall be a blessing. I will bless those who bless you, And I will curse him who curses you; And in you all the families of the earth shall be blessed.” (Gen 12:2-3)

But why is this granted to me, that the mother of my Lord should come to me? For indeed, as soon as the voice of your greeting sounded in my ears, the babe leaped in my womb for joy. (Luk 1:43-44)

Later in Luke, when the child Jesus is presented in the Temple, the elder Simeon prophesies:

Behold, this Child is destined for the fall and rising of many in Israel, and for a sign which will be spoken against (yes, a sword will pierce through your own soul also), that the thoughts of many hearts may be revealed. (Luk 2:34-35)

Here, Mary is linked to the Cross of Christ in the piercing of her soul.

I describe these stories as “gratuitous” in that they go well beyond the simple point of the Virgin Birth. Mark and John have no mention of the conception or birth of Christ (though they both include Mary in their narrative). The abundance of Marian material in Luke can only point to her veneration in the primitive Church. She is not just the Virgin who gives birth to Christ – she is also blessed by all; she is the cause of joy to the Prophet John even in his mother’s womb; she is a unique participant in the sufferings of Christ, destined herself for a mystical sword that will pierce her very soul.
This is information that points to the unique place of Mary in the first century Christian community. How can the Church not venerate one whom John the Baptist greeted with a leap of joy when he was in the womb? How can the Christian community be rightly centered on the Crucified Christ and ignore the soul-pierced Mother? The material in Luke is prima facie evidence of the primitive veneration of the Mother of God. That veneration never ceases in the Church, but matures over time as the Church considers the meaning and depth of Christ’s Incarnation, Crucifixion and Resurrection.
It is obvious that many Christians would prefer to read only Mark’s gospel and ignore the obvious implications in Luke and John.
John’s gospel seems to me to be marked with a profound understanding of the mystery of Mary. Of special note is his first mention of her. We meet her at the Wedding in Cana. John provides no introduction to her character – he presumes a prior knowledge on the part of his readers. At the Wedding, the wine runs out. And with no explanation of a practical sort, John simply relates that Mary tells Jesus, “They have no wine.”
It is profound. His disciples have seen nothing as yet. No miracles have been performed (this Wedding will be the scene of the first miracle). And yet Mary knows who He is and what He means. She is already fully initiated into the truth of His life and ministry.
Many Protestants have made much of Christ’s reply to her: “What is this between you and me?” They have treated the statement to mean: “What business is this of yours?” In fact, it simply asks, “What is this between you and me?” But St. John puts the statement in a context: “For mine hour has not yet come.” Christ says to His mother, “It’s not time. This doesn’t have to begin yet.”
They share the bond of the coming Cross. His life will be offered, a sword will pierce her soul. And once He begins, nothing can stop the movement to Golgotha. Her response is simple: “Do whatever He tells you.” It is a repetition of her earlier, “Be it unto me according to your word.” Her complete humility and self-emptying before God is a human reflection of the self-emptying of Christ on the Cross. With this new “fiat,” the inexorable journey to the Cross begins.

The mystery of her participation in Christ does not end with historical moments – for the sharing of those moments in the gospels are in no way merely concerned with the historical record. They are primarily theological moments. She holds not just a place in the history of salvation, but in its theological understanding and existential participation as well. The gospels are written for our salvation, and not as mere information.
And it is this theological and existential reality that are missing from many contemporary accounts of the Christian faith. The question is often asked, “Why do I need to venerate Mary?”
First, the Orthodox would not say, “You need to venerate Mary.” Rather, we say, “You need to venerate Mary as the Theotokos” (birth-giver of God). This is the theological title dogmatically assigned to her by the Third Ecumenical Council. She is venerated because she is Theotokos. To venerate the Theotokos is an inherent part of rightly believing in the Incarnation of the God-Man. To ignore her as Theotokos is to hold a diminished and inadequate understanding of the Incarnation.
But this is speaking in terms of mere ideas. The Incarnation is not an idea – it is a reality – both historical and now eternal. The Incarnation is the God/Man Jesus Christ. And, more fully, the Incarnation is the God/Man Jesus Christ born of the Holy Spirit and the Theotokos. This is what is asserted in the Nicene Creed.
The reality of this statement is not an idea, but a Person, both in the case of the God/Man, and in the case of the Theotokos. The act of believing in the Incarnation of Christ is made manifest in the worship that is properly directed towards Him and in the veneration that is properly directed towards the Theotokos.
And it is this that is so difficult to explain to the non-Orthodox. For doctrines are easily perceived by them as ideas, even factoids. In Orthodoxy, these doctrines are living realities. It is of little importance to acknowledge that someone is, in fact, my mother. It is of the utmost importance that I honor my mother (by Divine command) and love her. We do not think doctrine. Doctrine is a description of the realities by which we live. We venerate the Theotokos because, knowing what we know, we cannot do otherwise.

A Miracle of the Virgin Mary in a Turkish Home of a Paris Suburb
Αναρτήθηκε από ΝΕΚΡΟΣ ΓΙΑ ΤΟΝ ΚΟΣΜΟ στις 10:36 π.μ.